Investors should prepare for a 10% fall in European stock markets, warns Henderson fund manager Tim Stevenson – but careful stock selection now can weather the correction and deliver growth over the long term.

So are investors right to be cautious? Stevenson suggests investors have been put off by the threat of political turmoil, but points out that the last German and French election had little impact on stock market returns. What has impacted markets – both bond and equity prices – is the volume of quantitative easing flowing from the ECB.

Today, ECB President Mario Draghi announced the bank was holding interest rates and making no changes to the bond purchase programme of €80 billion per month. To date, the ECB has bought more than €1 trillion of government bonds, pushing down yields to negative territory. More than 75% of government bonds in the Eurozone pay a negative yield, and equities have felt the benefit as hot money flows into stocks looking for yield. 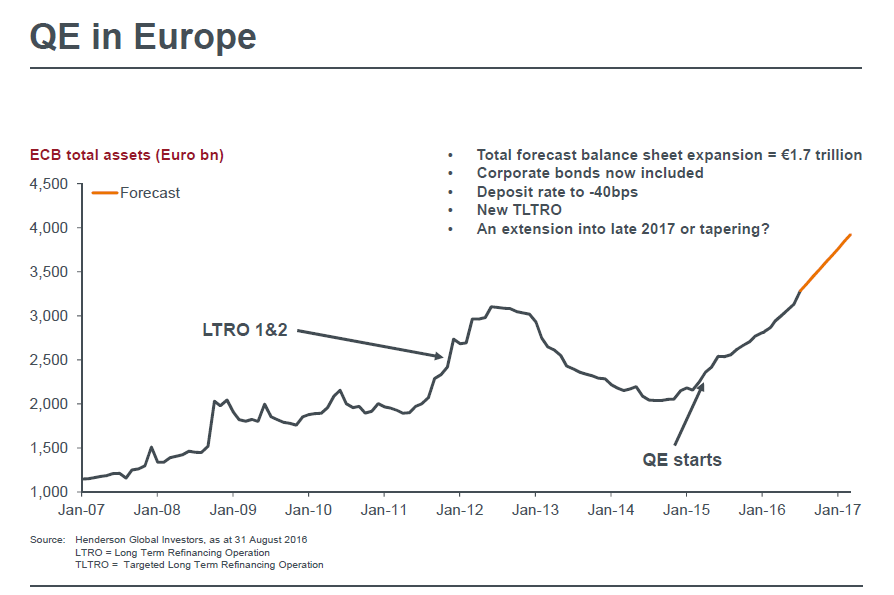 But Draghi did hint that QE could not last forever, and many economists have predicted that the bank will begin to taper its bond buying next year as well as raise rates back to zero from negative territory.

“The latest Euro area data continues points to stable albeit unspectacular growth ahead and, at the same time, inflation trends are getting more positive – the headline is set to continue picking up modestly, mainly on base effects from higher energy prices for now, but core should also drift higher,” said Anna Stupnytska, Global Economist at Fidelity. “This improvement in the inflation picture should allow the ECB to marginally reduce its stimulus in 2017, by tapering its QE programme.”

What Next for Markets?

Stevenson agrees that inflation will return next year, as oil prices creep back to historical norms. He predicts that as inflation rises and rates move upwards alongside, some investor money will flow back into bonds, causing a stock market correction. However, he insists European fundamentals are strong – with the continent set to beat the UK on GDP growth, debt levels and current account balance over the next two years. Earnings forecasts are positive too, with healthcare, travel, retail, media and even energy and financials expecting better earnings in 2017 than this year. Earnings growth has been a significant driver of the trust’s performance in the past.

In the year to July 2016 the trust’s performance was driven by services and technology stocks, as well as an underexposure to banks. Stevenson has since relaxed his position on financial stocks, adding Spanish bank BBVA (BBVA) and adding to ING, Amundi and Van Lanshott.

“Inflation will be good for stock markets, it will give pricing power back to companies and erode government debt,” said Stevenson. “Yes stocks look expensive on the face of it, but if you consider time scale there are some very attractive returns on offer. Investors have all become too short-termist, we want to participate in the future of good companies.”